The Cosmonaut is a capacitive stylus that was launched to much hype last Spring on Kickstarter. Created by the same guys that made the Glif tripod adapter for the iPhone, the Cosmonaut suffered a few shipping delays before arriving in the hands of backers this winter. Its creators promised an unparalleled writing experience on the iPad, but does it live up to the hype? Let’s find out…

Who wants a stylus?

So you may be asking yourself: who wants a stylus? Fair question! But while our fingers are great for tapping objects or virtual keys, they aren’t so good at the kind of precise input you need to draw sketches or notes. And although you can type pretty quickly on the iPad keyboard, drawing quick graphs or visualizing ideas can be a lot slower than using a pen and paper. 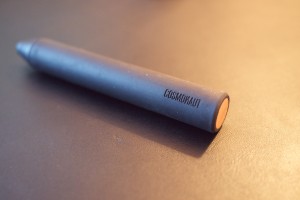 The Cosmonaut is essentially a thick rubber stylus with a capacitive tip and solid aluminum or wooden core. The build quality is excellent and it feels very solid and ‘weighty’ in your hand.

So that’s the build, but does it work? Yes – now it does: The first Cosmonaut pen I received had a few issues with the capacitive tip. You had to press down quite firmly to get it to work – quite an issue for ‘the perfect tablet stylus’. However, the guys at Studio Neat had already emailed purchasers to let them know they were aware of the issue and a few days later a replacement tip arrived. This one works as expected and offers a great sketching experience. 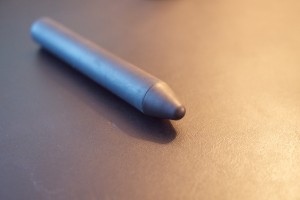 Ultimately an iPad stylus is only as good as the apps you use it with. I use the Cosmonaut occasionally for jotting down ideas with Penultimate and it works pretty well. If you often have to sketch out complex ideas, it can be a great alternative to pen and paper notes. It won’t however turn your iPad into a fully-fledged notepad replacement. Sometimes pen and paper still win for taking longer notes, or notes that are interspersed with text, simply because a capacitive screen isn’t really optimized for precision stylus input.

The Cosmonaut is the best stylus for the iPad I’ve tried so far. The build quality is amazing and I’d highly recommend it to anyone looking for this type of accessory. Oh and if anyone has other stylus-optimized iPad apps they would like to recommend, be sure to share them!