Joke of the Day (Warning some jokes may cause laughter)!!! : ) 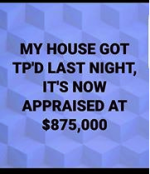 My dishwasher broke down yesterday !

I hope that you don't mind Randy, but I'm using some of your stuff elsewhere?

She's OK now; but how about you??? Few survive.

Thanks folks I needed that.
S

Bet that will make the CUT and not appear!!! Oh well it was worth a try because being an old man I like it very much!!!

I don't have a joke, but an observation: The Shining is starting to look like a documentary.

When I first glanced that picture I thought someone had drawn N - 95 masks on there.

Jonzjob said:
I hope that you don't mind Randy, but I'm using some of your stuff elsewhere?
Click to expand...

I don't mind at all.

We all need to have a laugh right now.

That's easy Sawday, they are kangorillapigs. You can tell by the spots

That's not too bad Randy as long as it ain't the dandelion and burdock. That one I can do without!

A husband and wife are on the 9th green when suddenly she collapses from a heart attack. ”Help me, dear," she groans to her husband. The husband calls 911 on his cell phone, talks for a few seconds, makes several other quick calls, then picks up his putter and lines up his putt. His wife raises her head off the green and stares at him. "I'm dying here and you're making phone calls and playing golf."

"Don't worry dear," says the husband calmly, "they found a doctor on the second hole and he's coming over to help you."

"Well, how long will it take for him to get here?" she asks feebly.

A gushy reporter told Phil Mickelson, "You are spectacular! Your name is synonymous with the game of golf. And I can see that you really know your way around the course. What's your secret?"

A young man and a priest are playing together. At a short par-3 the priest asks, "What are you hitting on this hole, my son?"

The young man replies, "An 8-iron, Father, how about you?"

The priest says, "I'm going to hit a soft seven and pray."

The young man hits his 8-iron and puts the ball squarely on the green.

Then the priest tops his 7-iron and dribbles the ball out a few yards to the center of the Ladies' tee.

Police are called to an apartment and find a woman holding a bloody 3-iron standing over a lifeless man. The detective asks, "Ma'am, is that your husband?"

"Did you hit him with that golf club?"

"Yes, yes, I did." The woman begins to sob, drops the club and puts her hands on her face.

"How many times did you hit him?"

A golfer teed up his ball on the first tee, took a mighty swing and hit his ball into a clump of trees. He found his ball and saw an
opening between two trees that he thought he could hit through. Taking out his 3-wood, he took a mighty swing. The ball hit a tree limb, bounced back, hit him in the forehead and killed him.

As he approached the Gates of Heaven, St. Peter asked, "Are you a good golfer?"

The bride was escorted down the aisle by her father, and when she reached the altar, the groom was standing there with his golf bag and clubs at his side.

She looked at him and asked, "What are your golf clubs doing here?”

Hi, here is a reproduction of a sign on a local shop door :- SEMI-AUTOMATIC DOOR PLEASE PUSH.
IF THAT DOES NOT WORK, IT'S LOCKED-
TRY THE DOOR ROUND THE CORNER.

Jonzjob said:
That's easy Sawday, they are kangorillapigs. You can tell by the spots

That's not too bad Randy as long as it ain't the dandelion and burdock. That one I can do without!
Click to expand...

Far too easy. Try this one:

I'll give you a clue. Although it has horns it's not a goat.

Of course it's not a goat, I'm a stupid as I look!

It's so obvious that it's a rinahippocow. Indian by the small ears.

It's so obvious that it's a rinahippocow.
Click to expand...

Hey John, you need to start diluting that wine with some water!

chscag said:
Hey John, you need to start diluting that wine with some water!

Or is he sitting on a spinning centrifuge???

I'll also have you know that I'm not as think as drinkle peep I am mate!

Anyway, all I'm doing is to give the correct answers to these obvious questions and I never make mastikes.

For those who just don't get some of the rules these days..