Still new to Macs and I have a question. When I look at my startup apps, there appear to be quite a few there. Which ones are critical to starting the OS? I would like it to load as quickly as possible.

I have a 20" Intel iMac with 1g ram and Tiger. Any idea's? I can add a list of the apps in the start up list if it would help.

None are critical... Just handy.

I have mine set to "startup" with Safari, Mail, and quicksilver...

It just makes it so that the apps you normally use a lot are "ready and waiting" when you login.

Welcome to the forums!
B

System Events is listed in mine. I've never had the noive to delete it.
OP

Here a screen grab of my startup items list. I really don't know what any of these are for, any help?

Hey folks, I think tajota is talking about the System's "Startup Items", not the User's "Login Items"...

The middle column tells you what they are for. But I don't think I'd mess with any of those. The OS is really good with sleeping processes that are not in use. And some functionality may be cross linked with other things.

Well, on second though...

But the rest... definitely keep.
D

So, I'm wondering how to look at those items. I can find the user login items with no problems, but how about the system startup?

We are referring to the Login items.... The OP simply referred to them as "Startup items". Same thing.
B

Tajota, I had assumed you had meant the log-in items until I read giulio' post, because until OS X, log-in items were called startup items, and because what are now called the startup items are off-limits to mere mortals.

Apple has isolated the system folder — or has tried to — from accidental deletions, additions and modifications, so the Mac's foundations can't be damaged by inexpert and unskilled users and by the type of internet malware that's the bane of the Windows world.

If you open one of the folders inside the System's Library folder to see the icons inside, then hide the toolbar on the left by clicking the button on the top right of the window, you'll see a read-only icon at the top left of the window — a pencil with a line through it.

You'd have to defeat the safeguards to change any of those files, and you might damage the system.

RIDE said:
We are referring to the Login items.... The OP simply referred to them as "Startup items". Same thing.
Click to expand...

Nah... did you see his screen shot? That's not the login items panel... is it? Attached is what mine looks like. Also, the items he/she mentioned are not programs, they're services/daemons. 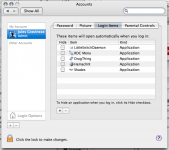 To awaken this thread, I was wondering about these. If I go in and delete any of these items, will it mean that I can't use any of these services in the future, or will it just mean that they won't start when I login?