I apologize if this issue has been addressed before, I did search a little bit and didn't find anything that was similar. I am a brand new Mac user so I'm a little worried I did something to it myself. I purchased this macbook brand new from the Apple Store in April, 2008.

A few weeks ago I noticed a white shadow in the lower left corner of my macbook and it has since grown. I do use the screensaver, which I have set to activate after 10 minutes of inactivity so I don't think it's image burn or anything like that.

I'm so happy I bought the Apple Care when I got the computer and I have an appointment to take it in on Tuesday. But in the meantime, I'm a litlte worried they might blame me for the problem. Hopefully I didn't do something stupid. Has anyone seen this problem before? Is it something they could be caused by the user? Is there something I can do to fix it myself?

I tried taking a screen shot with with the cmd/option/4 (which I learned about here, thank you!) but interestingly enough the problem didn't show up when I did that. I ended up taking some digital photos instead and used a solid black desktop background so it's easy to see the problem. I've attached a picture here and there are more here: http://s325.photobucket.com/albums/k392/trixare4kids2/

Thank you in advance for any thoughts/suggestions. 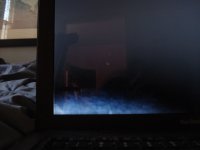