Can anyone please help me, I am trying to setup a page in indesign in pixels as I need to do some artwork for a website. I can't seem to find a way to do the page in pixels. Can anyone help me or point me in the right direction?

Can't seem to do it and in the prefs, you can't choose pixels either as a measure unit (oh no the unit word!... *inside joke*). My guess is you would need to convert it in some kind of way. This would be very easy to do.

You could start in Photoshop, do your drawing there then send it to InDesign. You can surely calculate the size of the drawing and the space the type is going to take if it exceeds the drawing borders. It makes sense it doesn't accept pixels as units as it is based on layout and type.

The only way I have found to do it so far is to paste in a background from Photoshop into indesign and use that for the size. Its strange how indesign can't cope with pixels in this modern time.

Alright I think I figured it out, you have to change a preference, but you can easily change it back:

In inDesign, click on InDesign and go to Preferences > Units & Increments.

Then under Ruler Units change the Horizontal and Vertical from inches to points. Points are the same as pixels as far as I know, so you should be fine. Just remember to change it back to inches when you aren't working for the web. 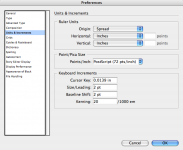 Sorry but no, pixels aren't the same as points. There are 72 points (or 6 picas) in an inch. You can have an image at 300 pixels per inch, 150 pixels an inch. Etc. This is based on resolution while picas and points are fixed sizes and units.

Maybe, but it would only be by coincidence. From the linked site:

The image DISPLAYS based on the number of pixels, not dpi.
Click to expand...

I would recommend simply doing the work in Photoshop.
M

InDesign for webpages? First of all I hadn't seen that in the OP's first post. And like Surf says, there are more suited apps for this.

And even if you do put your doc in InDesign at 72 ppi, what are you going to do with the PeeCee that sees at 92 ppi?

Print does not involve pixels at all, which is why it's not an option.

The whole premise of Photoshop is pixel manipulation.

I would advise not using InDesign for webpage layouts. Instead i recomend using Illustrator seeing as it is better type-based than Photoshop and works in pixels. You can always place your banners from Photoshop to Illustrator.

There's no problem with using InDesign for web. Export as EPS and then import into Photoshop at 300dpi. Then resize to 72dpi and slice it up.
OP

I get the feeling that people are telling me not to use indesign. I know I can use something else, I have for years. Its strange how Freehand can support pixels and indesign can't. I just want the option, or a work around doing it inside Indesign.

I wouldn't recommend using inDesign for web graphics. As others have pointed out, it's not really suited. Though, this may change with CS3 - I checked out the Adobe site the other day, and the demo movies of CS3 inDesign are looking brilliant. I don't remember too clearly, but I think (I think) you can set pixels there, and maybe also export to Dreamweaver and Flash. I think that was inDesign...

In the meantime, I'd recommend using Illustrator as well, and exporting to photoshop. Illustrator has a handy pixel preview function, so you can retain all your vector work (if any, but there probably will be) and preview it pretty accurately before exporting. This way you can throw shapes about without caring about res, really focus on a nice layout, and always get a nice preview. Then, when you're ready, hand it over to photoshop to tidy it up, and slice it if need be.

So, I don't think inDesign is fully capable of web design just yet, but CS3 may change that. For now, I think illustrator and photoshop do a nice job - at least they have for me. There's also flash, but that's a whole different ball game.

On a side note, I think you can input the dimensions as pixels, but it would convert them to millimeters or your set measurement. I do this all the time in illustrator when I'm making icons or banners. Throw in the pixel dimensions you want, it converts them to millimeters, but the dimensions are still the same. This may also work in inDesign. You'll get the document size right, but you can probably forget about guides Hope that's of some help anyway.
OP

I really need to look into CS3, I don't think the trials are online yet.

I am just looking at the Tour now.

Location
In your closet

Pixel_Donkey said:
Its strange how Freehand can support pixels and indesign can't. I just want the option, or a work around doing it inside Indesign.
Click to expand...