Hi everyone, new convert to mac. I have purchased two late 2013 imacs in the past two months. 8 GB RAM, 1 TB hard drives, 21.5 monitor. If you need more specifics let me know.

Here's my problems/questions. I'm going to attach two pics. The first is of my imac I purchased today. When looking at disk utility, you can see it says Macintosh HD twice and is missing some of the disk utilities tab options.

The second one is of the same model imac purchased two months ago. When I am in disk utility in that one there are many more tab options and it doesn't have Macintosh HD as the first name.

How can I have the first one look like the second so I have more options? Thanks. 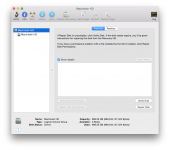 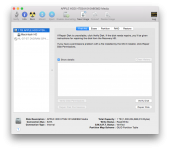 Simple different drives or different o.s versions not all drives are created the same

Did you purchase the second iMac brand new from Apple or is it used | refurbished? The first screen shot shows the same 1 TB hard drive as the second screen shot but it looks like it has been renamed "Macintosh HD" and it shows up as a logical drive. Also notice that there is no free space on the drive. It says that all the space is being used
OP
S

Hi chscag, both were purchased brand new from Best Buy. I know in the first there is plenty of room, I'll attach a screenshot from about my mac. Is there any way to make the hard drive in the first screen shot appear like the second so I have all the selection tabs in disk utility?

No, they are not the same.

The first screen shot would be that of a "Fusion" drive - 2 separate drives, a SSD and a HD, paired, formatted as and being treated as a single volume.
The second is that of a single HD.

You should also be seeing other differences, for example the boot times between the 2 machines - the Fusion drive I would guess likely boots in half to 2/3 the time it takes for the other one.
Last edited: Feb 14, 2015
OP
S

Hi Bob, thanks. So if I understand correctly, you're saying the two computers have different hard drives? Since they are the exact same model shouldn't they have the same HDD? I have a screenshot here from the same computer that has Macintosh HDD listed twice. It lists only one HDD. 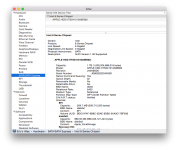 Doing some research here - the single SSD in one of my Macs (now that I am looking) is also showing as a logical volume group. What I have found thus far - this appears to be a bug introduced in Disk Utility back around OS X 10.8.

I know the probable cause on mine - were both of your Macs picked up in sealed never before opened Apple boxes?

Well, I know how mine got like this - I have partitioned the drive myself and this is apparently a bug that was introduced in 10.8.3 while Apple was trying to deal with large drives and still not fixed.

If you reboot your Mac in question to the Recovery partition, head to DU, the Partition tab, you'll find that the Partition drop down will be grayed out and will not permit you to make changes to the drive.

The only fix I've found thus far involves wiping and starting over using DU from 10.7 or 10.6.
Neither one of those installers will even boot to test it out on my '11 Mac.

The indications in all I have found, it is not supposed to be a problem on smaller HDs or SSDs.
Have to differ on that point since mine is a 250 GB SSD.

So to translate - You can buy two identical iMacs with different hard drives. If you asked for 1TB hard drives it is extremely possible the person you worked with at Best Buy did not know what a Fusion drive was versus a regular mechanical hard drive. And it looks like you got one of each.

A fusion drive is a blend of an SSD and a mechanical drive. The SSD portion is 128GB and the mechanical is 1TB or 1000GB. In actuality it is 1128GB. The operating system is located on the 128GB and it makes it load and perform much faster. The two parts of the hard drive will perform together great.

The other mac with the 1TB mechanical hard drive is actually 1TB (well a little less because there is always reserve space). It will be a tad slower but will run just fine.

Also in Disk Utility on the one with that shows Macintosh HD -> Macintosh HD, click on the second Macintosh HD and you should see some more tab. Try it with the other one too to see what it shows.

Based on the screenshot in post 5, it would appear to be only a single drive there, not a fusion drive setup.

It appears to me that the one with the LVG has either had FileVault enabled or it has "possibly" been repartitioned since it left the factory.

What I am reading with more searching on the topic, is that Yosemite apparently does this if you use the DU GUI with all notebooks in particular and does not do that if you use Terminal. Not seen anything specifically related to the desktops yet except related to large drives and most of the discussions I've found are related to Mac Pros.
Share:
Facebook Twitter Reddit Pinterest Tumblr WhatsApp Email Share Link