Frequent enough to be annoying, I get a dialog box spring up asking me to give my account name and password for the network - can anyone say why I might be getting this frequent polling?
OP
J

P.S. I have a screenscraped png copy of the box that is attached, and note, if it makes any difference, that the Account Name is filled in when the box actually displays - of course I've erased it for security and privacy reasons.
Note that I don't remember this happening with my first OS X, Snow Leopard, but I did get it with my leap to Mavericks, and I think it's now more frequent with Yosemite.
The WiFi network is a university network and the box has been appearing for over a year, and overtime it appears I've faithfully typed in the password. However, very recently, I've tried just cancelling the box and it seems to have no deleterious effect. 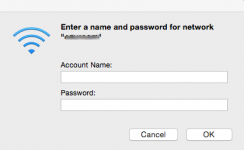 The authentication dialog is being controlled by your university network and may be a requirement. If you've been able to bypass the dialog and sign on anyway, you probably should be contacting your IT rep at the school and ask why.
OP
J

Thanks for the reply, chscag, but you may have misinterpreted the problem, and when I come to re-read my initial report I don't make it clear that the authentication is being requested multiple times during a session.
Of course I have to authenticate to the network initially, but during the same session I shouldn't have to re-authenticate multiple times.
I don't know how authentication is enacted for a network (or for access to any other resource), but I did come across an answer to a similar problem of repeated authentication which talked about the possible problem being that every image displayed by the browser having to be authenticated (or something like that - I can't find the article again). I mention this just to illustrate that repeated authentication problems can crop up in other contexts.
Note that as far as I'm aware the problem doesn't arise for those wired to the network or for others who WiFi to it, but the other WiFiers usually use Microsoft.
C