Not a trivial firmware update, there's likely a hardware change (either on the USB chip side or the physical port side) to go along with the upgrade..

Just wait until USB 3.1 actually shows up in mass market..

Agree w/ Raz0rEdge, the changes will likely be in firmware and probably a transition to a thinner USB adaptor, such as the one shown below; all of my external drives have the thinner 'notched' USB plug-in for attaching to the drive unit, but the older USB standard for plugging into my computers.

If interested, checkout USB 3.0 vs. USB 3.1 - Technical Comparison and also the information HERE. 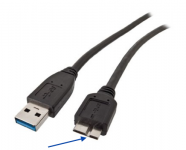 A January 2013 press release from the USB group revealed plans to update USB 3.0 to 10 Gbit/s, effectively putting it on par with Thunderbolt by mid-2013. The USB 3.1 specification was released on 31 July 2013, introducing a faster transfer mode called "SuperSpeed USB 10 Gbps"; its logo features a Superspeed+ (stylized as SUPERSPEED+) caption. The USB 3.1 standard increases the signalling rate to 10 Gbit/s, double that of USB 3.0, and reduces line encoding overhead to just 3% by changing the encoding scheme to 128b/132b. Though, some initial tests demonstrated usable transfer speeds of only 7.2 Gbit/s, suggesting a 30% overall overhead.

The USB 3.1 standard is backward compatible with USB 3.0 and USB 2.0. Using three power profiles of those defined in the USB Power Delivery Specification, it lets devices with larger energy demands request higher currents and supply voltages from compliant hosts – up to 2 A at 5 V (for a power consumption of up to 10 W), and optionally up to 5 A at either 12 V (60 W) or 20 V (100 W)."

It's been over a year since the specs were released. I wonder how long it takes to get to the consumer?