Hi, I have a question I am hoping someone can help me with.

I finally switched over from iPhoto to Photos last year (I just preferred the appearance of iPhoto and didn't see any advantage of Photos, but eventually had to make the switch with Catalina). My image library is still in the same place and is still called "iPhoto Library", which is weird because I no longer even have iPhoto on my computer, but that doesn't seem to be an issue. However, when I used iPhoto, I could find all of the original images in the "originals" sub-folder, where they were organized according to upload date, broken down into year/month/day. Once I switched to Photos, they became completely randomized. They are stored in folders labeled A-Z, while each image has a randomly generated name made of 20 or so letter and number characters instead of its original file name. The folders are not chronological, so each new image I upload will end up in a completely random location in a random one of the folders. There is a "masters" folder separate from the "originals" folder, which does have photos with their original name sorted chronologically, but there are only a handful of raw images from a few select months from one specific year. No idea why this is.

I backup my images just by copying the library folder to an external drive. Before it was nice knowing I could find any specific photo by knowing the approximate date, but now it is impossible to find any photo by searching through the files, which is not a great feeling. This may never be an issue if the Photos app on a different computer is able to read the library and sort and name everything correctly, but it is still pretty strange. So I am wondering first of all, can anyone confirm that another device or OS install would be able to read everything correctly despite the randomization, and secondly, why is this happening and is there any way to revert the whole library back to how it was? Thank you.

Why are you mucking about in the innards of the photos database at all? There is no reason to do that, plus there is a chance you could mess it up and lose the entire thing if the database becomes inconsistent. Just use Photos itself to sort and find images. That is what the app is for, and it's pretty good at it.

If you want one of the images as a file, you can export it from Photos to a file at that time.

Now, if you want to see pictures organized in Photos, in the left sidebar you should see "Photos" as an option. Click on that and your pictures will show. At the top of the window you can select to organize by Years, Months, Days or see All. Photos will also allow you to find People, Places, recently added images. You can see media types (videos, selfies, live, portrait, etc. You can create your own albums of pictures. You can click on Imports and see the images by the date they were imported to Photos.

So, don't muck with the database, use Photos.

Can you please post a screenshot of what you see when you open Photos. I moved years ago and what was in iPhoto looked the same in Photos, all the folders, albums showing in the left had column. Recent updates have increased what the app does by itself - moments etc - but the basics are the same.

Sue, what he is doing is using Finder to go the actual "photos library.photoslibrary" database and then viewing the contents. If you do that you get this: 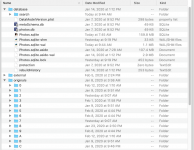 And then if you open up the numbered folders you see this inside: 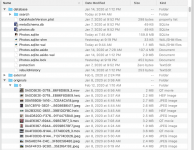 So, basically he's seeing the internal structure of the Photos database and wonders if he can change it. The quick answer is NO, because the software is expecting the structure as you see it. However, if he exports a file from inside Photos, using the Export function, the original name is attached to it because that information is also stored in the database. I guess (I never looked) that iPhoto had a different schema for the database, one more based on the time of import, or picture taken or some date. But Photos works differently internally than iPhoto did.

OH!!!! Nighmare. Why make life difficult for yourself?

Yep, never look at sausage being made!

I suspect the names of the files in the database may not be randomized, but may contain some data about the image that the database uses. However, even if the name IS random, it doesn't really matter because the database itself also contains the original name and data. I read somewhere that one of the neat features of Photos is that when you edit an image, the original is kept along with a record of your edits. When you then display the edited image, Photos retrieves the original and reapplies the edits dynamically. That's why the folder is named "Originals." The edits are stored in one of the .db files. I've not experimented with it, but according to what I read you can always to back to the original if you want to do so. If that's true, that is really slick!

When you go into edit, there's a tab up top to 'revert to original' or alongside, to flip to show photo without edits. Do Cmd+Z and it pulls the edited version back up.

When transitioning from iPhotos to Photos in the macOS upgrade the iPhoto library was "converted" creating a new library called photos.photoslibrary but the old iphotos.iphotoslibrary remained. After a little cross checking I deleted the old iPhotos library freeing up about 30Gb of space.
So Beleg Cuthalion which library are you looking at because if you still have the old iPhoto library it is redundant? Do you see a Photos library as well?

Hi all, thank you very much for your replies.

Jake, to answer your question, it was rather useful to locate original images in the iPhoto database. iPhoto seemed to have a hard time reading RAW files from some cameras, so I would edit photos in a separate application and import both the original and the edited version to iPhoto, and while the RAW version might not display in the application, it would still be in the database. And if I wanted to find the original, it was super easy the way the database was set up if I knew roughly when it was taken. Basically, the new format that appears randomized is so different and unintelligible to me that it was very disconcerting because I worried that if my computer crashed it might not be readable by Photos on another device. But you have answered my question as it sounds like that would not be an issue. So I guess there is nothing to worry about. Thanks again.

And Rod, I only have one folder named "iPhoto.photoslibrary" which seems weird, but probably not an issue. Thanks.