Multiple versions of JAVA and Yosemite

It seems that in order to run QuickBooks 2011 under Yosemite I have to install JAVA 6, an older version than is currently installed.Since I'm not really knowledgeable about these things I thought I would check to see if doing trhis would screw everything else up.

I have seen posts on here where they had to run more than one version of Java. I would recommend setting the security settings to high on any versions you have installed. You will see some additional prompting before it runs stuff on websites which can be a good thing.

Thanks. Sorry, but how do I change Java security? When I googled this the answer was that Java would be on the Preferences menu but it isn't.
D

I have had to do the same thing for a different piece of software from IBM, Java 6 under Yosemite - so far, no issues that I've encountered....
M

Mark F said:
Thanks. Sorry, but how do I change Java security? When I googled this the answer was that Java would be on the Preferences menu but it isn't.
Click to expand...

If Java isn't in system preferences, then it isn't installed.

Mark F said:
Thanks. Sorry, but how do I change Java security? When I googled this the answer was that Java would be on the Preferences menu but it isn't.
Click to expand...

Go to System Preferences -> Java -> (a control panel for Java will open). Select the Security tab. Move the Security slider to Very High and the defaults for that level should take care of it. If you are really concerned you can uncheck "Enable Java content in browser." This should not affect Quickbooks.

MacInWin said:
If Java isn't in system preferences, then it isn't installed.
Click to expand...

You are absolutely right. I had done a Spotlight search and when Java showed up I didn't trace through as to where it actually was. It turns out that Photoshop CS6 has a version of Javascript sitting in Adobe Utilities, not in System Preferences. So I guess there would not be any conflicts except perhaps with CS6 and if that happens at least I'll know what the problem is.

Thanks ot all again for your help.
S

virtualization on a mac????

Hello,
I do not know a lot at this stage of the game about macs. But I am familiar with linux. I know that JRE is system wide. Therefore in my understanding you cannot have more than one version of JRE installed on any stem in any os. Unless you want to look into using virtualization to fit your plan.

I may have spoken too soon. In addition to the Javascript I also have some Java files in Library/Core Services. But I do not have any mention of Java in System Preferences. See the attached screen shots. I apologize for the large size, I do not know how to shrink them. 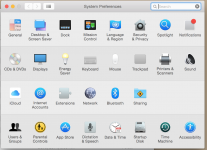 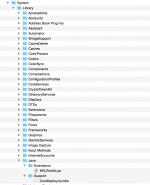 You can insert pictures into your post by clicking the paperclip icon in the toolbar when you write your post.

What version of the Java runtime did you install? The System Preferences configuration pane has not always been a fixture of the runtime (I want to say that it was introduced in version 7). If you have an older version, of which Java 6 would certainly qualify, check /Applications/Utilities for a configuration panel.
OP
M

Well, I'm feeling pretty lost at the moment. Last night I went ahead and downloaded Java 6 from the Apple site. Technically identified as Java for OS X 2014-001. When I clicked on the download file it opened up a Volume on my Desktop and I was abe to install QuickBooks 2011. But I now want to raise the security level as has been suggested but other than this Volume on my Desktop and the file in Downloads, I so not see where anything has been installed.

I think, but am not sure, that Java was required in order to register the product. I say that because QB opened fine on Yosemite and seemed to work fine until I tried to register and then it gave the Jave required message. So I'm wondering if I can simple eject the Java volume and send the Java downloaded file to Trash?

BTW, I used the paper clip in the toolbar for the three attachments but they still come out rather large 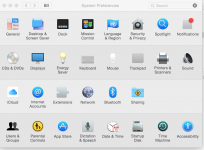 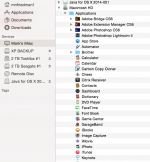 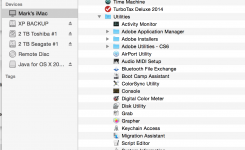 Mark F said:
But I now want to raise the security level as has been suggested but other than this Volume on my Desktop and the file in Downloads, I so not see where anything has been installed.
Click to expand...

As I just learned, that would be because Apple removed the preferences application (for some reason) from their build of Java 6 (see here). Why? Who knows.

The simple answer to all of this might be to install a newer and supported version of Java. Do you absolutely need version 6? If not, it might be easier to use a version from Oracle that is still supported and configurable.


Mark F said:
BTW, I used the paper clip in the toolbar for the three attachments but they still come out rather large.
Click to expand...

You have to select them from the drop down menu next to paper clip once you've uploaded them to insert them into your post.
OP
M

I finally have QB working properly. I just wish I knew if QB needs Java to work properly, but that is a question I will have to raise on the QB site. But since I cannot locate where Java is installed on my Mac HD I guess I cannot address the security issues.