Is there any way for me to dislodge a jammed RAM module in my iMac Core 2 Duo? It's in the top slot and won't budge for the life of me.

Sorry man, can't help ya there.
Hand it to the Mac genius, that's about all the advise I can give you.
Bryan

Perhaps, if the edge of the RAM stick has a piece that sticks out on the sides, you can possible carefully try prying it out with something else in there, or the other RAM stick if there is one. If you can find where it seems to be most stuck in the slot, try to wiggle it out with a pair of pliers. Not sure if the stick is still valuable to you or not.

I would try these things personally. I'm not sure how brave of a soldier you are. ;P
T

KevinFarr said:
If you can find where it seems to be most stuck in the slot, try to wiggle it out with a pair of pliers.;P
Click to expand...

In the end I used a pair of long-nosed pliers. It was quite a strange situation. My iMac only recognised 1 of the 2 X 1gb RAM mods installed. I tried a lot of different configurations and sometimes I'd successfully boot and sometimes I'd get a flashing sleep light and no boot.

Finally I realised by observation that the levers were not seating the RAM firmly (even though I did successfully boot from some of the test/troubleshooting configs regardless of this.)

This is when things became scary for me.

I didn't know what to do .... the AppleStore was closed and on past experiences with them I am loathe to return any time soon. But how was I going to remove the RAM? It was a 512mb module and I knew I could just pop in either a 1gb or the other 512mb module and carry on regardless, but that's not me!

I tried my hardest to remove it, with various tools and while I could pop one side of the stuck module out a little, it wouldn't budge further and my fat-short-nailed-fingers were useless to say the least.

Then I undid the 4 screws that enable you to see the innards of the iMac, but I was loathe to do this as I was becoming too involved and was concerned about nulling the warranty by leaving my footprints behind. (I wasn't clear on the rules about going inside myself while under warranty)

I did however, and after peering inside and peeling the heavy protective paper (?) a little, decided that I wasn't going to continue and closed it up again.

Then I asked my son to help as his fingers are much slimmer, but still no go. So I left it for a few hours and when I went back, I was using a watch makers screwdriver but wasn't having much luck. I wasn't sure about using a metal tool like long nosed pliers and handling the module due to causing irreversible damage, but in the end one good grip of the module (avoiding any soldered points) coupled with a firm controlled pull, was the only way to quickly remove the jammed module...

So, now I have 2 X 1Gb of 'recognised' RAM installed. I pushed them in as far as possible after closing the levers (which are useless now). I'm not going back in unless I have to and my contingency plan is intact.

In the image attached, you can see (hopefully) that the top module is sitting in further than the bottom module.

Note: this photo was taken after releasing the levers. 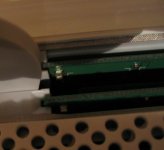