Need expertise of people using that combination. Need to upgrade my Iphone 4 because some apps do not work anymore and do not want to repeat the ugly experience of putting IOS 8 on my Ipad2. Had to give it away because it became useless.
Thanks

Is there a question in there somewhere? I have an iPhone 5, 5S and iPad 2 all running on iOS 8 and they work completely fine..

The Thread Title mentions iPhone 5 and iOS 8; but then you talk about upgrading your iPhone 4.

Which is it? My Google research suggests iPhone 4 probably not compatible with iOS 8 and 4S very slow.

On the other hand, no problems with iPhone 5 or 5S.

This comprehensive article goes through all the problems that could conceivably occur during an iOS 8 upgrade and how to deal with them:

The Most Common iOS 8/8.2/8.3 Upgrade Problems and Solutions

I'll rephrase my question.
1-Got Iphone 4 (IOS 8 not compatible)
2-Need to go to Iphone 5 (IOS8 compatible) because of a handful of applications do not work on IOS7
3-Since I had a very bad experience with Ipad 2 and IOS8 I was asking for advise on Iphone 5 working with IOS8.
Thanks for your reply


IWT said:
The Thread Title mentions iPhone 5 and iOS 8; but then you talk about upgrading your iPhone 4.

Which is it? My Google research suggests iPhone 4 probably not compatible with iOS 8 and 4S very slow.

On the other hand, no problems with iPhone 5 or 5S.

This comprehensive article goes through all the problems that could conceivably occur during an iOS 8 upgrade and how to deal with them:

The Most Common iOS 8/8.2/8.3 Upgrade Problems and Solutions

OK Carlo, got it.

As I stated above (and Ashwin also mentioned), there are no major issues with iOS 8 and iPhone 5.

I also recommend a glance at the (longish) article to which I provided a link. It covers more or less everything and mentions iPhone 5 (and 5S).

For what it's worth, I advise that you upgrade via a direct USB connection between the iPhone and iTunes on your Mac, rather than by WiFi. Not only is it quicker, but takes up less space on your iPhone during the installation phase. And the USB should be plugged directly into your Mac, not through a Hub.


Raz0rEdge said:
Is there a question in there somewhere? I have an iPhone 5, 5S and iPad 2 all running on iOS 8 and they work completely fine..
Click to expand...

I will be more specific......
The reason I am asking for IOS8 on Iphone 5 is because
1-I need IOS8 for a handful of apps controlling devices (Gopro, Dslr, etc)
2-I had an Ipad 2 on IOS7, got a notification from Apple on the Ipad to upgrade to IOS8, did it and it started to work erratically, **** slow, hanging up, Safari impossible to use and so on, never seen something like it since I moved to Mac in 1998. Ree installed the whole thing from scratch and it did not change a thing. Tried to get back to IO7 and guess what, I was out of date, the very same day, meaning that the notification arrived far too late. Updates did not do any better, the unit became practically useless, went to my grand daughter to be used for her games.
You are lucky with your Ipad 2, being a former scientist the only plausible explanation is that this unit had some sort of a technical problem and it made crisis when the operating system squeezed it to its limits.
Hope now nou understand what was behind my query.

Gotcha, a few things to keep in mind with the way Apple does things..

The version of iOS that comes with your device (regardless of what it is) is the BEST version of iOS for that device. You can usually go to one more version after that without seeing too many issues, but jumping to the version beyond that (so iOS 5 to 6 and then 7 for example) usually causes issues.

You might think, they are just a simple number change between 5 and 6 and so on, but remember that these releases are usually a year apart and meant for HW that is coming out on a yearly cycle. If you look at the chart below you'll see the iPhone 5s' CPU performance is 40x faster than the iPhone 5 which is better than the 4S and 4 and so on. 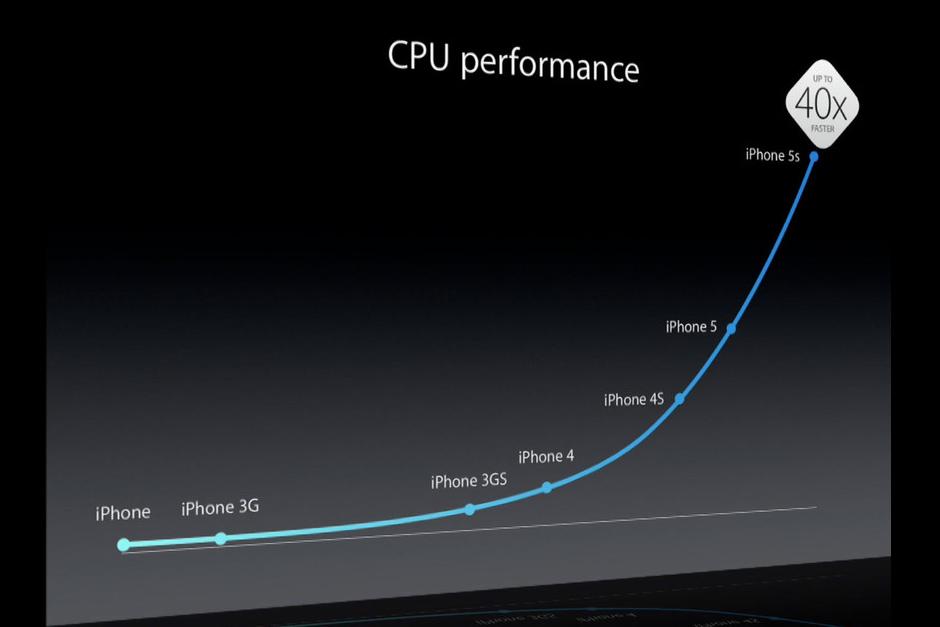 Since the newer version of iOS is targeting the newer hardware, trying to run it on older and slower hardware is going to cause issues and slowness. Just because iOS supports the older versions of the hardware doesn't usually mean its a good idea to upgrade to it..

If you do upgrade to IPhone 5S or 6, then the newer versions of iOS will run remarkably well.

I had an iPhone 4 just like you and had it on iOS 7 which is VERY slow compared to iOS 4/5 that I ran for a long time. When I upgraded to iPhone 5S, the overall speed of the device compared to the iPhone 4 was just amazing. Recently I got a chance to see a friends iPhone 6 and the speed increase over my iPhone 5S is equally amazing..
Share:
Facebook Twitter Reddit Pinterest Tumblr WhatsApp Email Share Link