imac reboots for no reason

My iMac 27 (2011 version) has rebooted twice in the last week for no apparent reason. I am using the latest Yosemite OS, and all else seems fine. It has occurred while using Chrome browser. could it be an OS issue vs hardware? I printed out the error message but don't understand it. It starts with "panic"

The next time your iMac goes into kernel panic (that's what it's called), copy the message and post it here to this same thread for us to take a look at. You said it happened both times when you used Chrome? Are you running the Chrome 64 bit beta by chance?
OP
J

Thank you for your response. I was hoping someone would be willing to look at the report, which I saved as a Word File and will try to attach. I am using
Chrome Version 39.0.2171.71 (64-bit). I did use disk utilities and a memory diag. app and found no errors, although these are not deep checking programs.

I'm glad you uploaded the panic report. Two things stand out in that report which we strongly advise should be removed from your machine.

1. Symantec Norton AV - remove it as it's not needed. It uses valuable resources and very likely interfering with normal operation.

2. MacKeeper - Please remove this as soon as possible. It does more harm than good and may in fact be the cause of the panics. We have done an extensive review of MacKeeper which you can read about later.

For both of the above: You must uninstall them properly or they will continue to cause problems. Go to the Symantec site and get their uninstall instructions. As for MacKeeper, there are numerous sites which show how to uninstall it. Make sure it's completely uninstalled.

After both of those are 100% removed, let's see if the kernel panics go away or not. If they continue, we can trouble shoot further. But with both of those programs installed, we can't tell if they are the cause or lending to the cause.

Gee chscag, and no offence to the OP, but do you and some of the other admins and moderators not get tired of typing almost the same advice over and over or do you guys use some boiler plate text or even Typinator or something.

And the MacKeeper stuff just keeps coming and coming, just like their treacherous ads.
OP
J

Thanks for the advice. I will check out how to remove MacKeeper. I have had it a long time and never had a problem before. I'll also go after Norton, although Comcast, our internet provider provides it as a free service and recommends it. One other quick question; when I did a Permissions check and repair (both in safe mode and regular) I keep getting errors for an Epson printer which I don't have on my system. I can't seem to make them disappear, even with repeated Permission checks. Any problem with that?
Thanks again for taking the time to check my problem out, I'll keep everyone posted.
Jerry

I'll take a guess that Comcast gets some commission from recommending MacKeeper if they really do.

Fro your Epson "errors", check in your Print & Fax pref pane settings in case one has been setup there and delete it.

Also, you can remove and Trash all your Epson and other printers stuff you'll never use from the printers folders: /Library/Printers
OP
J

Sorry, I didn't mean to mislead you! Comcast did NOT suggest MacKeeper. Comcast suggests and provides Norton Sec. Suite to its customers. Do you think there is any need to reinstall OS X
10.10.1. So far all is well, but the errors occurred far apart in time. I have removed MacKeeper totally, but haven't done Norton yet. I'm sure that you are correct in that it uses a lot of resources. Any need for anti virus software for the iMac if Norton goes? I have had it since the iMac in 2011 without a problem.

There is no need for Norton Anti Virus because there are no viruses in the wild that can infect your Mac. There is some malware but that can be avoided by staying away from pirate sites and other nasties. Comcast recommends it because the overwhelming majority of their customers are Windows users. When you run Windows, you do need an AV program.

If you continue to have problems that appear to be OS X related, by all means download and reinstall OS X 10.10.1, and just treat it like installing a OS X COMBO Updater that was often recommended.

And as suggested, Trash Norton Anti Virus as you don't need it, and before doing so, maybe open Activity Monitor and have a look at all the resources it's using. All just a waste, and all the other problems it can cause.
T

IMAC reboots over and over(kernil Panic)

So my IMAC just started to reboot on it's own out of no where.

I does not go into the OS it just keeps rebooting. Attached you will see a image of the error I get. (Kernil Panic) but also notice the red lines running up and down on the screen thats what I see. Those where not there before.

please help as I have all my work in that machine I do use time machine so I know its safe, but goodness wrong time for this thing to go bonkers.

Thanks all for reading, 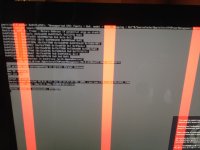 First off, get it turned Off completely. Press and hold the power button until your Mac begins to turn off if it isn't already.

Wait a few minutes and then try starting it up using Safe Boot Mode. Press the power button and then push and hold the shift key immediately you hear the start up chime and keep it held down until the spinning grey wheel shows up.

Select your admin username and log in and hope and pray.

It that fails, your Mac probably has some hardware trouble or failure.
OP
J

Just an update: I have removed both Norton and MacKeeper, and so far all is well. I have searched around and found that the version of Norton Security Suite that Comcast provides has had compatibility issues with Mac OS X 10. Other users have reported reboots, locked computers, and kernel errors. I called Comcast and they acknowledged that there was an issue. (Of course no one notified anyone about it.)
Norton is apparently working on a Mac OS X Yosemite workable version, although I might just take the advice here and skip the entire idea of installing Norton again.
As to the last message above, I have a 2011 iMac, and had some hardware issues that were eventually traced to a video card (Radeon) known malfunction in that year's iMac. There was actually a recall, and that solved my issue when the card was replaced free of charge, even past the warranty date.

Good to hear that everything seems to be working.

It sounds like you have one of the affected 2011 27" iMacs, some of which got hit with a double whammy - first the 1TB iMac Seagate replacement program (since expired), then the iMac (27-inch): AMD Radeon 6970M Video Card Replacement Program (still in effect.

I also have a mid-late 2011 27" iMac, but thankfully it wasn't any go the affected models.
I'm also staying with Mavericks for now and everything works, and I don't need any of the latest Yosemite "features" - including some that don't seem to work for some users thanks.
OP
J

So far, my hard drive seems OK. I never heard about the recall, and now it is too late to check the serial number on the site; so I'll have to hope for the best. It's getting like the auto industry; you have to check the sites frequently to look for recalls. At least the gvt now has a site whereby you can be notified of a recall by manufacturer and year, then enter a Serial #. (Just another good reason to BACKUP regularly.) If my drive does die; I'll look at optical drives.

jerryoster Nortons has not worked since the late nineties with OS 9. The iMac recall affected 2010 and early 2011 iMacs with a 1TB Seagate only. If you have the late 2001, sold all through 2012, you may be okay.

guys I am in a predicament here I cannot start in safe mode to even try and uninstall anything. Any ideas please please help.

I really need this computer back up and running.

What can I do to help you help me - Image of the entire computer so you know what I have? let me know please. If you do not know what my issue is , please go on the first page of this thread I have a picture on a post(kernel issues?)

First, you should not have Hi-Jacked someone else's thread and instead started a new one. However, since you're already here.....

The kernel panic specifically states that the CPU is unsupported. How about giving us specifics: Your Mac: Year and model, and which version of OS X it's running?
T

Ahhh, my apologies for Hi-Jacking this thread, just thought why start another if one is created, less mess I thought. Either way sorry.