I saw this link macOS Catalina: How to use the new features in Safari 13 | Macworld in another post and thought as I was now giving Safari 13 another try as default I'd check out the new features.
One of these features is tiling windows to the left or right of screen in the Window Menu. What is supposed to happen is the active window moves left or right according to your selection and the inactive windows should be displayed as tiles in the other half of the screen.
Is this working for anyone else?
Try as I might to make this work I cannot. The active window moves left or right but the rest of the screen is empty. See below, note there are two other inactive windows that should be tiled. 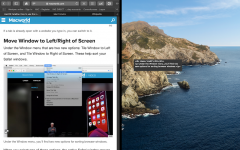 I knew this was a feature of iPadOS 13.x and it works fine on my iPad Pro; but not having macOS Catalina yet, I didn't realise that that feature had been carried over to it as well. Nor did I realise that it was directly related to Safari 13.0.2 which I have on my iMac running macOS Mojave.

I assumed the feature was an OS matter. If indeed it is supposed to work in macOS Catalina, then I guess your problem may have to be added to the list of misbehaviours that have so far been reported.

Yes, it's possible that this feature works in Safari 13 even in Mojave. Check if you have the Tile Windows left/right under the Window Menu.
If so maybe it works in Mojave and this is as you suggest another Catalina issue.

Check if you have the Tile Windows left/right under the Window Menu.
Click to expand...

I don't appear to have that option. This is what I see under the Window Menu: 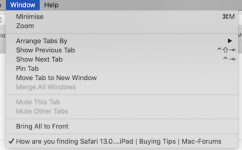 @Rod Thanks for that article. If I had remembered that those features had been added I'd have been using them during the beta.

I just tried that feature and it works for me (sorta). The first time I tried it the man window shifted to the left as I told it to. Thumbnails of other Safari windows appeared on the right and the one I chose then appeared on the other side of the screen. When I tried it the second time (after telling it to move the primary window to the right) no other Safari windows were available to choose but other windows were (Finder. Mail, etc).

I got out of this mode both times by hitting the ESC key. However, I found that the "other" window that was tiled on the opposite side remained in full-screen mode and took over the entire screen.

So, in my second test, my desktop only had the Safari window and I had to swipe to the find the Chrome window and then exit full-screen on it to bring it back.

This largely looks like a useless feature if the purpose is to quickly tile a couple of applications for comparing info.

I find that the Spectacle is much better suited for this since I can operate on ANY window.
S

You're right. The other windows don't have to be Safari windows. I was able to choose a Finder window in one test. I didn't explain that well.

Looks like another thing for Apple to fix. Probably not a feature I would use anyway. When I tried it I had two other apps open and two other non active tabs in Safari and despite numerous tries I got a blank other half of the screen.

I was trying it basically to see what I could do with it. Like, how could this be useful to me? It's not really like iPad OS Split Screen for which I can see some uses but it's so difficult for me to get the gestures right that sometimes I just give up.