This morning I wanted to print a PDF from the MBP and it came up that the printer could not be found. I tried it from the iMac and it was seen OK and ready to print and has printed off the web page I wanted.

I have tried turning the printer off/on and it is still not seen. I have tried rebooting the MBP, same result, no printer.

I then deleted the printer and adding it again using the System Preferences, but the printer was not seen by the MBP. I had to manually type in the printer address on the 'Add' window 'IP' button. That was accepted and now shows in the 'Printers' window in the Sys References, Printers & Scanners.

The system still can't see the printer. I checked to see if there are any new drivers, but it seems to be using the Apple driver.

Below shows the printer in 'in use' but it isn't. The last print has finished and there is nothing in the print queue.

Edit. : - I almost forgot to say that I have also tried the connection with both the printer and the MBP using WIFI. Still no connection. It has worked fine on the WIFI connection before. 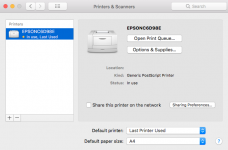 Is the message showing in the Default Printer menu significant maybe? See if anything else listed there - ie, the correct name of the printer.
Is the dock showing the printer in use? Try another print and open from the dock, maybe there is a job you can cancel.

Sometimes feel like throwing my printer out the first floor window...

What my system preferences show.

I took the name I entered for the printer from the name on the iMac so that should be correct.

I opened the printer queue from Sys Preferences and there was a job showing. I deleted that but it still doesn't print. I did a CMD/P to start a print and since I have reloaded the printer after the delete it shown a different window with what seems like less options. I hope to have bodged them together below? The top one is from the MBP the lower one from the iMac

No chance of throwing it out of a first floor window as we have a bungalow But I suppose the flat roof over the kitchen would do the trick? 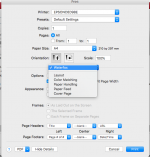 Rather than try to fercle with the above reply.

This is what the print window used to look like. It's taken from the iMac. Now on the MBP there are no options for the printer and I have no idea how to get them back?

Sorry, but my brain cell is getting very confused here

Something else I have just found is that on the MBP, if I select Settings on the print queue window I don't have the 'Utilities' option that I have on the iMac. I am sure that they were there before. 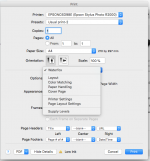 Did you restart the Mac that was not seeing the printer? Sometimes this happens on our home network, but usually with a winOS PC.

Yes Bob, it was the MBP that's the problem and I did a reboot on it.

This is very strange, because it happened all of a sudden. Nothing on the MBP had been changed since the last print as far as I am aware.

I have the same problem since upgrading modem and printer is not recognized . Iw will only work if I connected it with USB. Says Router/Access Point channel conflict has been detected. Change the wifi name didnt help. Internet provider suggest I should erased the modern and start from stratch...no way . I have to use USB if I need something to print

When you select the Printer Pref Pane in the System Preferences and then click the "+" to add a printer, does the name of your printer show up there either by bonjour or whatever??? It should if everything is working properly.

Give it a few minutes if needed.

Internet provider suggest I should erased the modern and start from stratch...no way . I have to use USB if I need something to print
Click to expand...

pm-r said:
When you select the Printer Pref Pane in the System Preferences and then click the "+" to add a printer, does the name of your printer show up there either by bonjour or whatever??? It should if everything is working properly.

Give it a few minutes if needed.

When I go into the Sys Pref and try to add a printer after I deleted it, click on the '+' and nothing shows in the Printer Pref Pane Patric. So I don't get and choice of Bonjour or anything. That is why I tried the manual approach. I have to admit that I had forgotten the Bonjour name. I never could remember anything French and it was very difficult living there for so long :Blushing::Blushing: Only kidding?

You may need to do a "power cycle" with your home network.

This is an old article,How to Power Cycle your Modem and Router - Digital Inspiration, but it's still relevant today.

Try going to Epson's support site and see if you can find their method for resetting the printer.

If i recall it was something to do with holding some button as well as unplugging the power cord but it had to be done in some certain order.

Or maybe you could set up printer sharing in the Mac it actually works from. Maybe the other Mac could then see it.

I don't think that it's the router Bob because the iMac is plugged into the same router.

Our system is all Ethernet connected. The iMac, printer and MBP are all connected via ethernet and the printer isn't plugged directly into either Mac, just into the router via the ethernet cable.

As an alternative all can be connected to the router via WIFI. The iMac still works with the printer on that but the MBP doesn't.

There have been no updates before the problem occurred, it just suddenly happened for no apparent reason?

I have also now done a power on reset and it's still the same I'm afraid.

Did you see this, If you can'''t print from your Mac or iOS device - Apple Support, and go through all suggestions listed there?

Did you try my suggestion i posted in #12 of trying Printer Sharing in System Preferences -> Sharing and is the printer showing up there and what does it say about it, and can other computers print to it according to it's availability?

Also, are you still getting the notice that it is in use??? You will have to get rid of that before you can do any printing, at least from that Mac where it shows up.

You may want to try shutting everything down and then booting each one separately, and try again if you have already tried that.

Patrick, I haves selected the printer sharing now that I have deleted and manually reloaded the printer. But there is still no connection there.

Bob, I have had a quick look at the link, but I am so tired that I can't see straight at the moment so I will check through it tomorrow.

Thank you both for your time and trouble for me. That doesn't sound quite right, but ???

Patrick, I haves selected the printer sharing now that I have deleted and manually reloaded the printer. But there is still no connection there.
Click to expand...

Have you tried printing to it while it is directly connected to the Mac you are wanting to print from, and maybe try ethernet and/or USB connection, or even wirelessly if it is a Wi-Fi-Capable printer.

I believe that Printer Sharing prefers to have the printer connected directly to the Mac that is going to do the sharing.

I hope you had a chance to get a nice shot of Scotch or Whiskey or maybe some nice wine before you head off to bed io give your brain a rest. And maybe a few anti-frustration pills and hopefully things will improve in the morning.

Patrick scotch is whisky, one of the better ones too

I decided to have some Milk-of-Amnesia in the form of a pint of good English beer earlier, so that helped with the sleep pattern especially when it was followed by a couple of glasses of good red with dinner. Medicinal only of course?

well, I've sorted it now, I hope !! But at one stage I had both the iMac and MBP not being able to print! I was getting VERY confusticated.

They were both telling me that the printer was off line, so I did a search, DuckDuckGo of course, and found out how to do a Printer System Reset. I did that on both systems and they both then let me do an add printer OK. But they still showed up as Off Line! So I rebooted both Macs and everything then behaved as it should and i can now print from both systems OK

So, thank you for all of your help and patience. It's great to know that it's there when needed

So I rebooted both Macs and everything then behaved as it should and i can now print from both systems OK
Click to expand...

Glad to hear it's all now working again...

Me too mate. I thought I was in deep do do when I got to the stage where nowt was working!

But I still had chance after to cut the grass in the lovely sunshine and get some more repairs done to one of my RC model gliders!