So I was using my MacBook and I was going upstairs and I dropped my MacBook Pro Retina and this is what happened.... (see pictures). Do I need to be worried about anything? It appears to be running like normal. 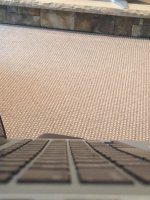 Picture #1: You can see the middle of the keyboard is somehow dented in. All the keys appear to be working fine. 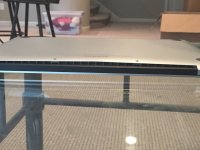 Picture #2: You can see the back plate is clearly bowing out.

Would it be worth it to bring it in to the Apple Store to have them take a look?

Klew721 said:
Do I need to be worried about anything?
Click to expand...

If you were talking about fixing any cosmetic damage. That's a different story…and totally up to you if you want that repaired (not going to be cheap).


Klew721 said:
Would it be worth it to bring it in to the Apple Store to have them take a look?
Click to expand...

You could…but accidents are not covered via Applecare (if the computer still has Applecare coverage remaining). And usually if the computer is running fine…the Apple diagnostic testing will probably not spot anything.

Just continue on. And if everything runs fine…no worries! Just consider yourself lucky that you got away with only some cosmetic damage.

Thanks. I might do the Apple Diagnostic Test to make sure.

Certainly do this if it will help you rest easier.

But like I said. If it's running fine 100%…then it's probably fine. And if something is wrong (which if it was you would probably know by now)…and something does need to be repaired. Most repairs are very very expensive. Sometimes so expensive that getting a new computer is the solution.

So what I'm really trying to say is. If the computer is running fine/100%/ok…having Apple run some diagnostics on it really won't accomplish much. And if something was wrong…and if the logic board needed to be replaced…are you really prepared to spend $500+ on a replacement logic board??

What you may not realize is. There really isn't that many parts inside of an Apple computer. So when something needs to be replaced…it's many times very expensive. And like I said…if everything seems to be working fine now…just continue on.

If something was wrong…then doing the Apple diagnostics would be the thing to do. Since then you would want to know exactly what was wrong…and what would it cost to have it repaired.

Thank you again. Everything came back clean in the test.

Klew721 said:
Thank you again. Everything came back clean in the test.
Click to expand...

Wow that was fast. Where or how did you run the test? I thought you meant you were going to go to the Apple Store to do it.

I just followed that.

Good deal. That is certainly one way to do it!