deleteing files in the trash

I moved time machine backup files to the trash to delete them. They won’t delete and I can’t move them because they just copy. How can I get rid of them?

How do I get them out of the trash?

Try clicking on them and select "put back". If you can't do that because it won't allow you to move the files, you might have to delete the entire backup sparse bundle and start Time Machine from the beginning again. In other words, you might lose all your past backups.

Davestrain said:
How do I get them out of the trash?
Click to expand...

Well, first give Chscag suggestion a try - just wondering if 'put back' will require your backup drive to be attached or whether you will be given an option - not sure?

Of course, you could go into the 'Terminal' and into the trash folder and delete from there - will it work? Plus, deleting stuff from the terminal is so terminal -

Another option is to give a program like Trash Without a try - website HERE - use it occasionally and believe that it simply allows you to select files and then just uses terminal commands - has not always worked for me and had to go through the Terminal anyway - let us know if any of these suggestions helps? Dave
.

I downloaded trash without. Moved items from trash to trash with out now I have a window
/Volumes/Dad?.Trashes/
won't go away. Just returns when I hit OK

Davestrain said:
I downloaded trash without. Moved items from trash to trash with out now I have a window
/Volumes/Dad?.Trashes/
won't go away. Just returns when I hit OK
Click to expand...

OK - relative to the Trash Without app, look @ my screen capture and the arrow, did you select that to delete your file/folder(s)? If not, then give it another try.

Also, I don't completely understand the name '/Volumes/Dad?.Trashes/', i.e. just kind of a weird name - you might have to end up going into the 'Terminal' to delete this item (and delete files w/i it and then the file) - let us know. Dave
.

That's right. IIRC the trash file is stored on each drive separately. That's why the files do not show if the drive is disconnected.
C

Trash Without seems like a fantastically bad -- bordering on dumb -- idea to me. Maybe if it were renamed Asking for Trouble ...
OP
D

What is the 'Terminal' . Where is it and how does it work?

Davestrain said:
What is the 'Terminal' . Where is it and how does it work?
Click to expand...

Well, if you don't know, then you may not want to because potential dangers lurk for the ignorant!

First, the Terminal is an app located in your Utilities folder in Finder -> Applications. Apple OS X is UNIX based (Linux is also based on UNIX), and the Terminal app allows you to communicate w/ your computer at a much deeper level w/o a GUI interface; commands there are powerful and often irreversible, so beware -

Second, by entering and knowing (WELL!) these commands can allow you to do many actions that require numerous steps and/or may not be easily done w/ a GUI interface. As an example, I just went into the app on my MBPro (see attached image) - my Terminal opens in my user folder; I entered the 'ls' command (see arrow) which listed the folders (the period before some are 'hidden' folders) in that directory - notice the hidden folder '.Trash' - after a 'cd' command to enter my trash folder, another 'ls' command (half way down that screen) shows a portion of the contents of my Trash folder on the laptop; from there I could use the 'rm' command to delete one or more items in the trash.

If you mounted that drive described w/ the weirdly named trash item, then you would have to learn how to migrate to that volume and then how to use the appropriate commands. SO, unless you want to buy a book or two and/or google numerous articles on UNIX terminal commands, stay away. I'm an amateur here and rarely go into the Terminal; other members are command line pros and may 'chime in' - I believe that you have 'screwed up' some of your Time Machine backups probably by trying to delete them incorrectly - not sure. Good luck - Dave
. 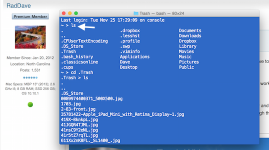 Thanks to all for the help. I don't think I will go any further I am not tech savvy. I will just live with junk in the trash. The forum is a great place to get help.
Thanks again
M

That's not the best decision because the files still exist on the drive and the space isn't free for you to use, which I presume was why you deleted them in the first place. Terminal is not a good idea, so you might need to do what chscag said in post #4.
OP
D