Using a laptop flat on your desk isn’t the best for your posture, unless you have a secondary monitor. Using a stand can bring the screen up to a proper eye level. I’ve recently started using the Cooler Master’s Jas Pro for my MacBook Pro, and it makes a big difference. 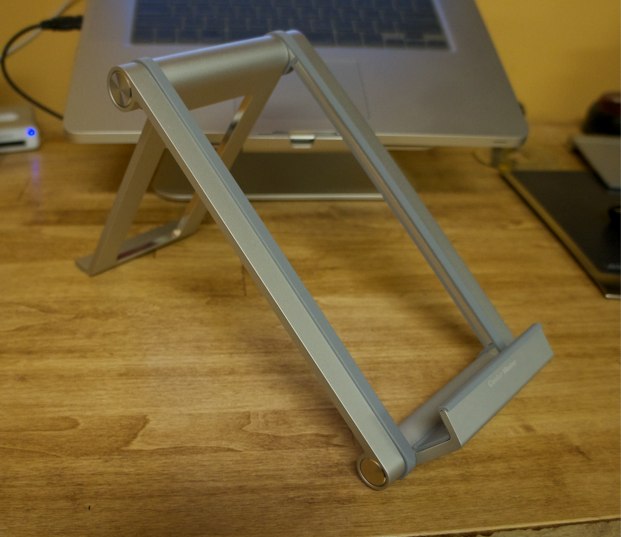 Made out of aluminum to match current Apple products, the stand is lined with soft rubber along the important edges that will touch your MacBook. The front tab holds the computer, and is plenty big to accommodate even an ancient thick Dell laptop. One of the best things about this stand is that it folds flat. Folded, it is about as thick as a internal 3.5in HDD, and can be easily slipped into your computer bag. 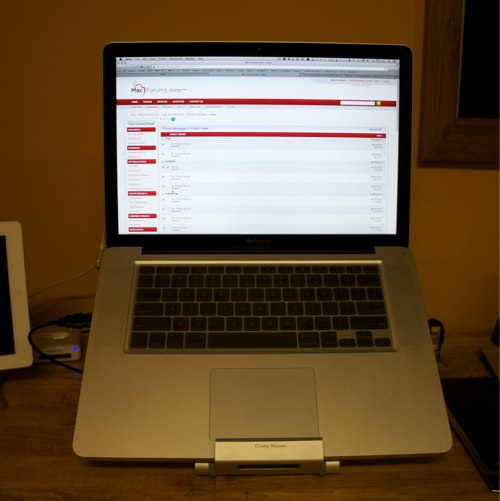 While folded, the Jas Pro is small, but set up on your desk, it takes up a decent amount of space. If you have a small area for your laptop, I would not recommend this stand. That being said, the stand pushes the display up. I’m tall, at 6’8″ and this stand can put the display at a comfortable height.

The Jas Pro stand is supposed to be adjustable, but I really wouldn’t call it that. Because of the design of the rear “foot,” it wants to be flat. You can bring the foot forward to raise the stand, but the MacBook’s display will only go back so far. Unfortunately, you can’t push the foot back very far. It’s limited in travel to just a little past having the foot flat on the table. Since the stand is steep, using your MacBook’s keyboard can be somewhat awkward. It can be done, but I’d recommend an external keyboard if you plan on using it for long periods of time. 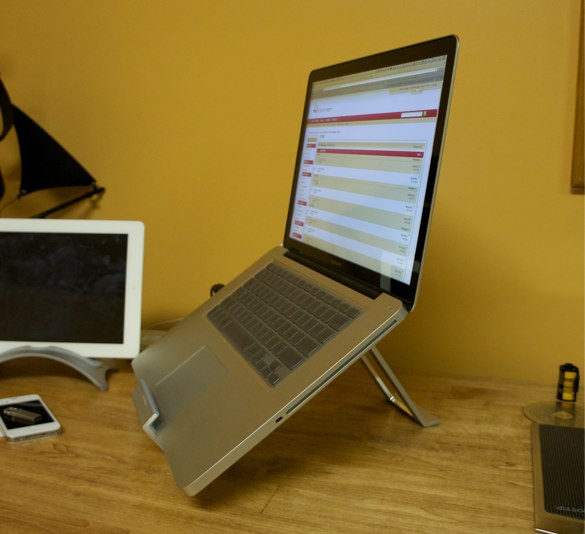 I like the idea of the stand, but I feel it doesn’t execute it’s purpose as well as it could. For being a collapsable stand, it is excellent, especially since it folds up small, but for a set it and leave it desk stand, it is lacking. I wish it could hold a laptop flatter instead of being set up so steep, this would really help keyboard usage. With a few minor changes, this stand could be an awesome stand, but those few flaws really hold it back.

Introduction
I’ve never really considered myself short of space on my desk despite the fact that my desk is quite small. The reason for this quite simple: I had an external monitor and I wanted to run two displays which meant that I had to accommodate the lack of space. Ironically however, I used my 21.5″ monitor for 95% of the work I did when I was at home and rarely made use of the extra screen real estate. It’s for this reason that I took up CoolerMaster’s offer to review their new L-Stand. The following is what I found after using the L-Stand.

Size & Aesthetics
The stand itself is a respectable size. Having never owned a notebook stand before, I have little to compare it to however. That said, the size is a little large for my 13″ MacBook Pro but this is to be expected since it is a “one size fits all” stand, designed to accommodate each size MacBook Pro including the now defunct 17″ model. Thus, there is a slight gap between the top of my MacBook Pro and the top of the stand itself. 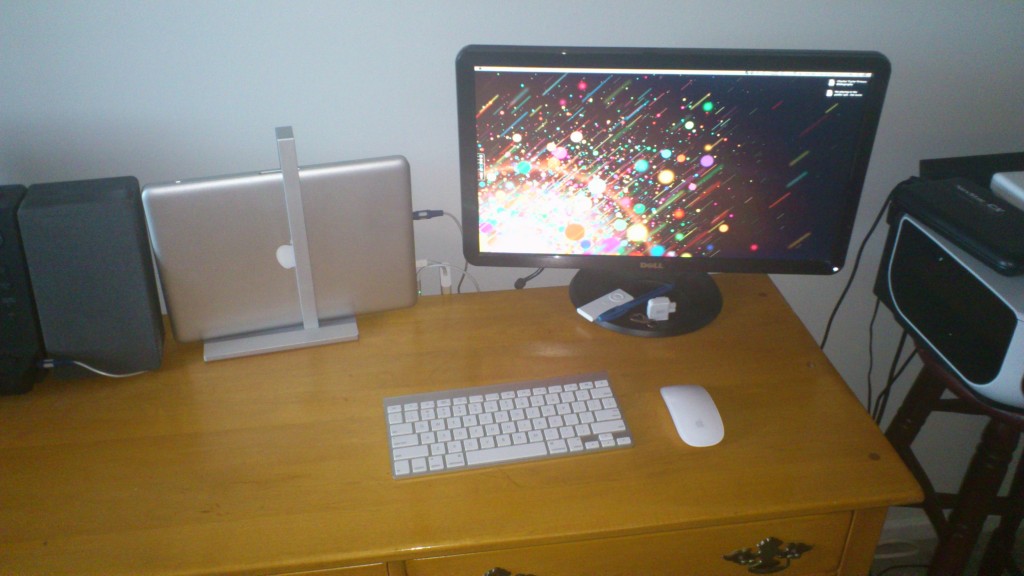 As the picture demonstrates, with a 13″ MacBook Pro, you get a little extra room at the top. Aesthetically, this certainly isn’t a deal breaker but it is a noticeable gap. This would be even more pronounced if you were using an 11″ MacBook Air (a model that is also supported by this stand).

The design of the stand itself is quite plain (which I love!) and matches the colour of the unibody design. The simplistic design of the stand complements the rather smooth and plain finish that characterizes the lid on Apple’s line of notebooks. Compare this to something like the following which, in my eyes, could use an aesthetic redesign: 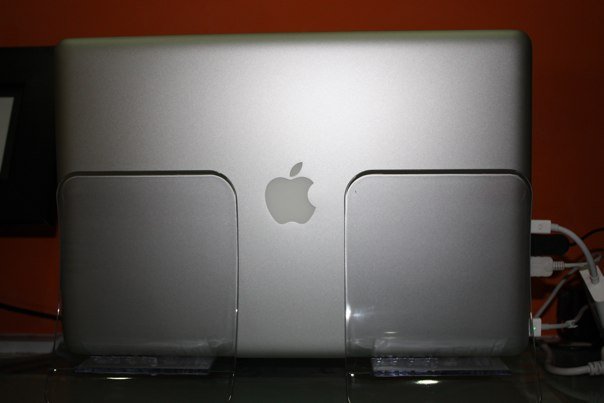 Although certainly not an abomination, it is clear from where I sit that CoolerMaster made an attempt to match the stand with the MacBook Pro/Air line, something not done with the above product.

Fit and Quality
Although size and aesthetics are important, a stand is worthless if it doesn’t do the job. In this regard, the L-Stand performs admirably in some respects but could benefit from some improvements in others. Let’s begin with the positives.

Positives
The insides of the stand are wrapped in a rubber like material that also serves to hold it in place on the bottom. This works wonders. To shift the MacBook Pro from side to side requires considerable effort which comes in handy if you’re frequently plugging and unplugging peripherals. The stand also appears to be built quite well. The structure itself is sturdy and the materials are hard or soft in the right places.

Negatives
My primary concern can be found in the ease with which the MacBook Pro can shift back and forth. Although you’ll have to exert considerable force to shift it from side to side, tilting it back requires little effort. Thus, it would appear that there is a little give. While this may not be a huge concern for MacBook Pro owners, I imagine that this would be of great concern for those who try to use the stand with a MacBook Air.

See a video of the “tilt” problem here. Although I don’t personally consider this to be a deal breaker, I wanted to demonstrate the “give” in case this was a concern for anyone.

The next issue isn’t specific to the stand itself but rather a combination of the stand and the design of the new MacBooks. As you can see in the picture below, connecting the MagSafe cable such that it “runs backwards” (away from the ports) is awkward and in this case, movement risks popping it out. 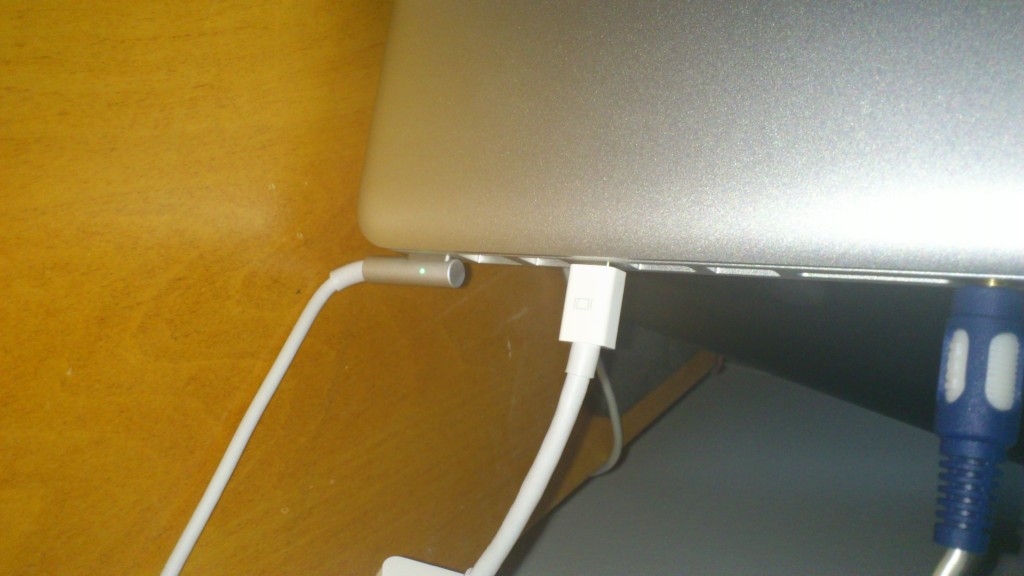 This can be a problem since, as you may know if you’ve tried clamshell mode before, OS X doesn’t like to run in clamshell mode on batteries. Perhaps a little extra thickness on the base would help obviate this problem (or, you could throw a book under it). You could also flip the MagSafe adapter the other way which, although it works wonders, blocks the network port and likely the firewire one as well (I don’t have a FW cable to test this theory).

Conclusion
The stand works well at what it was designed to do: safely house the MacBook. The rubber grips ensure that the notebook rests on a soft surface that won’t allow it to move. Although I haven’t tested this, I have a feeling that slippage out of the case would never be a concern. In terms of the tilting problem, I’m on the fence about this. Ideally, you wouldn’t have to worry about the back and forth but ideally, it would never rain and we’d all be millionaires. As such, it would be optimal if the device was more securely fastened to prevent this. While I don’t see this movement causing any major trouble, one can never be too safe.

This last concern is especially salient for MacBook Air owners. At its thickest point, the two notebooks are close in size (1.7cm for the MacBook Air, 1.8cm for the MacBook Pro). However, since the MacBook Air thins gradually from back to front, the fit problem will get worse and you’ll be left with considerable movement. Thus, my recommendations are as follows. If you own a MacBook Pro and you’re notebook is secure and out of the reach of anyone/anything that might disturb it with any considerable force, it’s a fine stand. If you own a MacBook Air, this stand is something you’ll want to try yourself before purchasing.

Given everything I’ve said, I can say that I’m quite happy with the stand. It met my needs of helping to clear up space and since I don’t have any concerns about the tilting, I intend to make good use of it.