There’s no secret when it comes to my tendency to try the esoteric operating platforms. Why? The simple answer is because they exist and I’ve derived a lot of enjoyment from exploring the unknown. Mobile devices are no exception which sounds weird when the army of mobile devices I use are powered by Android, a platform with near 40% market share worldwide and growing (source). Don’t let that fool you though – I was and remain a Linux user and I used to use Opera, both of which make hipsters look mainstream. This is partly why I was intrigued by Ubuntu Touch (hereafter referred to as UT), the mobile platform to come out of Canonical. In this article, we look at that intrigue to see what UT has to offer.

Disclaimer: To say that UT is early in development is a huge understatement. Consequently, I don’t strive to critique it as a finished product. Rather, this is an exploration of the paradigms and methods that Canonical is developing and what might be beneficial for users and competitors.

Ubuntu has a Mobile Operating System?

I liken Ubuntu to Java in one way (and only this way since to do any more comparisons would be to effectively and unfairly denigrate Ubuntu): the developers of this platform want it to work everywhere all of the time. Indeed, Canonical tried to raise money to develop a phone that would dock and become a full fledged desktop operating system (source). Why? The simple answer is coherence, a concept that many companies try to build through cloud services instead of a common platform/device. Apple keeps you in the ecosystem through iCloud but requires different platforms – OS X for general computing, iOS for mobile computing. Canonical’s idea was to dissolve that arbitrary line and make one device that, although is ran multiple platforms, provided one coherent experience in one device. While the Edge funding failed, the ideas remain. What remains is a similar paradigm: a mobile and desktop OS that cohere with each other through a common syncing platform (Ubuntu One).

Many of our users are familiar with Ubuntu on the desktop. In fact, self-professed nerds have probably seen or used it before. In that respect, it’s of little novelty for many of our hardcore users (a group that would buy a UT device anyway). However, it takes much of what it learned with it’s Unity desktop paradigm and flipped it on it’s head to make it mobile ready. That said, some vestiges of the desktop platform remain. In this article, we explore those.

At this point, you might be asking the following: as an article on a forum focused on Apple gear, this is a valid question. After all, it’s Linux based and, as of right now, only runs on a handful of devices designed to run Android. Before you go running away or writing things like “down with vansmith” or “let’s organize a coup”, think of it this way. Although this is a rather simple answer, here’s my reasoning aside from self-interest: UT is a conceptual (for now) look at what could be with some intriguing ideas that reimagine what has become banal. Who doesn’t appreciate that? After all, isn’t that what iOS 7 is trying to do?

A disclaimer before I begin. If the work that I do has taught me anything, it’s that putting out your bias for others to digest is important. Think of how much more respect you would have for a news reporter if they said “before I talk about what happened in Parliament today, know that I am an active supporter of the NDP” (a little opportunity to learn more about Canada for the non-Canadians out there). In that spirit, here’s my technological bias: in the grand scheme of things, I put iOS third in terms of personal interest. I am an admitted Android user and supporter (don’t think that leaves it free from critique – why must Android comes with so much useless crap in a stock install?) and think that Windows Phone 8 is significantly more interesting that iOS is. None of that should affect this review since it is not comparative in nature. Regardless, I’m going to leave that out there for you to do with as you please (fuel for the mutiny if you will).

I’m not one for adages but I’m going to start with one anyway: a picture is worth a thousand words. 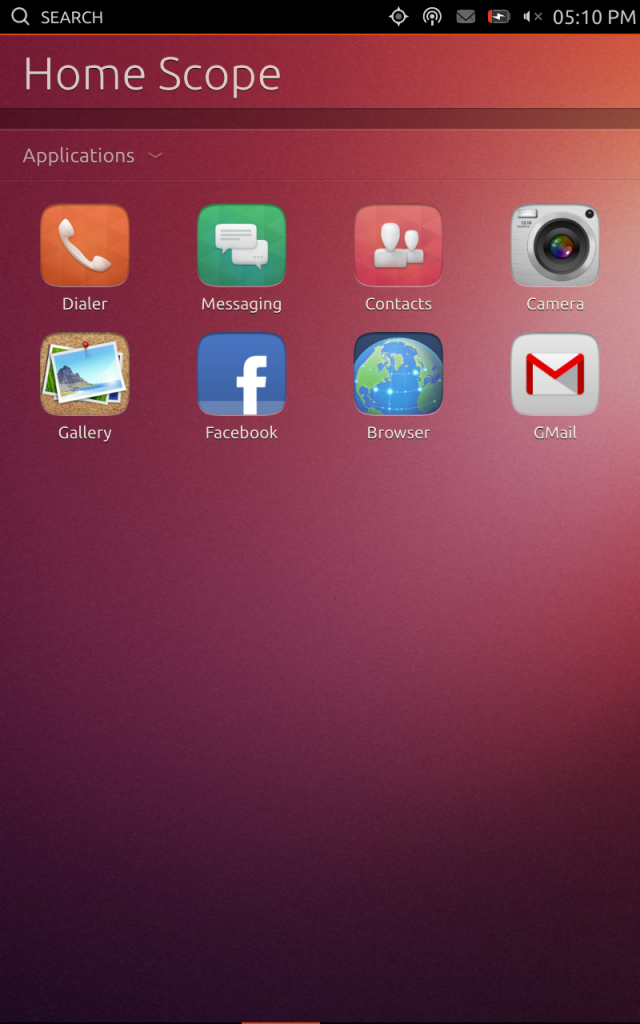 That’s not so jarring is it? In fact, it adopts what has become a common paradigm: icons adorning the home screen with a thin black status bar along the top. At this point, you’re probably thinking “okay, not too bad.” What you actually do with this home screen and how you interact with it might be the jarring part. By that I mean get ready to use your fingers to gesture everything. In fact, you can use UT on a device with no navigation or interaction buttons (aside from a power button). in fact, once installing it on my Nexus 7, it effectively turned it into a buttonless devices (for those that don’t know, Nexus devices depend on software buttons for navigation which disappear when you install UT).