I just received Cooler Master’s ARC stand for MacBooks, MacBook Pros, and iPads. It’s a device that allows the placement of a MacBook or MacBook Pro in a vertical position while using your notebook in what is called “clamshell mode” (using your notebook with the display closed and attached to an external monitor) or it can be used as a stand for an iPad. The ARC stand is “arch-shaped” (my wife thinks it looks like a “Taco-Shell”, which kind of makes it fun), has a deep wide slot along its length to place a MacBook or MacBook Pro in a vertical position, and has a more shallow slot across its width to support an iPad vertically. Both slots are “padded” with a relatively soft, flexible (“grippy”), non-slip rubber-like material that holds your device snuggly, while at the same time being very gentle to the exterior of our precious electronic devices (no scratches or marring). The Cooler Master ARC is about 8” long, 5” wide, and 3.5” high. Has a non-slip rubber base, and weighs about 850 grams (~1.8 lbs.), so it has some nice “heft” to it for stability. The ARC is available in either a black or white colored exterior. 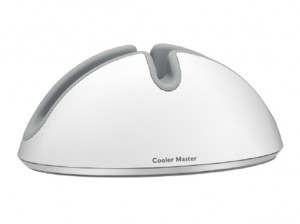 I tested the ARC with a 17” MacBook Pro, and an older “White” 13” MacBook. The fit in the ARC is very snug so much so that you need to put some pressure on the notebook to get it fully inserted into the stand. As mentioned above, the ARC is lined with a flexible “grippy” rubber-like material which adds to the “grippyness” of the stand. Once the notebook is fully placed in the stand, it is very secure/stable and because of the “grippy” material, it will not accidentally slide out. A possible downside to this “grippyness” is that two hands are required to remove the notebook from the stand (one hand to hold onto the stand, and a second hand to remove the notebook).

The ARC stand is very practical from a space saving standpoint. If you’re someone who frequently uses your notebook in “clamshell” mode (while using an external monitor) and you have limited desktop space, the ARC is perfect for supporting your notebook in a vertical position. At about 850 grams (~1.8 lbs.), the ARC stand held both the 17” MacBook Pro, and a 13” MacBook very securely and was very stable. Even if you nudged or bumped the larger 17” MacBook Pro with your elbow or hand…the length, width, weight, and non-slip rubber base of the ARC held the notebook stable and secure.

In addition, I did a before & after test where I monitored the temperatures and fan rpms for the 17” MacBook Pro. In the before test, the notebook was placed flat (not in the ARC stand) on a wooden dining room table for about an hour. In the after test, the same notebook was placed in the ARC stand (again for about an hour). Although I did not see any significant temperature differences, I did see what I consider a significant reduction in fan speed. In the before test, the fan speed was about 4800-4900rpm (revolutions per minute) and fan noise was very noticeable. In the after test, fan speed dropped almost immediately after being placed in the ARC stand. The fan speed dropped from 4800-4900 rpm to a much more quiet 4000 rpm. Room temperature during the test was about 80-82°F (kind of warm) so results may vary depending on room temperature.

As an iPad stand, the ARC performs equally well. The second separate slot for the iPad is lined with the same relatively soft, flexible (“grippy”), non-slip rubber-like material as the notebook slot. The ARC stand is perfect for placing your iPad in a slightly tilted vertical position for a great hands free way of using (finger navigating) and reading from the iPad. The ARC’s iPad slot is significantly less deep which prevents the stand from obscuring any part of the display but is still deep enough to securely hold the iPad. The ARC’s iPad slot allows easy one-handed placement and removal of the iPad. I would add that if you use some sort of protective case with your iPad, depending on it’s “bulk”/thickness, the iPad + protective case may or may not easily fit in the ARC’s iPad slot.

On the whole, the ARC works well but I have three critiques. If you are someone who uses a hardshell case to protect your MacBook or MacBook Pro, it will not fit in the ARC (unless the hardshell case is removed first). The ARC’s fit is very snug, and only accommodates the “thickness” of the notebook without a hardshell case. A second possible drawback is the need to use two hands to insert or remove the notebook from the stand. I really see this as both a both a benefit and a drawback however. Although you really do need two hands to insert or remove it, this snug fit is beneficial, since I believe this adds to the stability & security (which is a good thing with our expensive electronics). Thirdly, due to it’s shape & weight, the ARC may not be something you would take back & forth from home & work (maybe you need two ARC’s). But it would certainly fit easily in a backpack.

If you’re looking for a notebook stand that takes up very little desktop space (at home, office, or home office) I would definitely recommend the ARC stand for its stability, simple form = function design, the fact that it doesn’t mar surfaces, and its dual device support.  MSRP is $59.99 (USA and Canada).